The Wabbit and the Runaway Tram 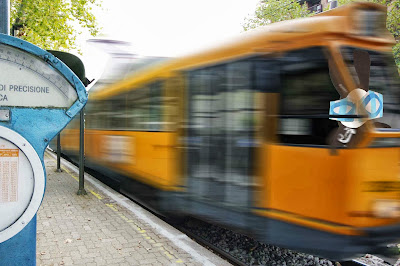 The Wabbit held on tight as the No. 9 Tram rocketed forward. There was a squeal as it rushed past a platform, so the Wabbit tried the brakes. Then he released some sand on the wheels but to no avail. The Tram got faster and faster. "Are you certain you're designed for this speed?" said the Wabbit irritably. "I don't really know," said Nine. "I'm bored with the same old route." The Wabbit looked quizzical. "Corso this and Via that," moaned the Tram. "It all looks the same." The noise was deafening and the Wabbit's ears twitched. "Ding ding, doors open, doors closed," continued the Tram. The Wabbit shook his head sadly. "Yes, how utterly dreary," he agreed in an attempt to forge a bond with the tram. But there was more. "People block the doors and won't let others off," said the Tram. "Oh really?" asked the Wabbit. "And some drape themselves round my ticket machine and jump off when they see an inspector." "Rascals!" shouted the Wabbit. "Am I not worthy of my hire?" asked the Tram, picking up more speed. "Oh yes, Nine," said the Wabbit firmly. "The tram is worthy of his reward, 1st Timothy 5:18." "Ah," sighed the Tram, "it's lovely to meet someone like you." "Watch out for that curve!" yelled the Wabbit.
at October 02, 2013