3. The Wabbit and the Psyche Tunnel 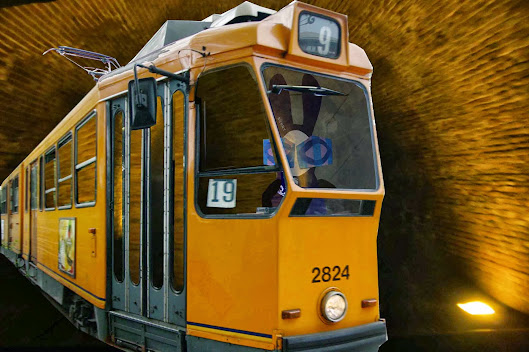 Nine, the No. 9 Tram swerved across the junction on one set of wheels and turned across a bridge. Ringing his bell frantically, he switched points without mercy and dashed across busy junctions against the lights. The Wabbit hid his eyes as cars screeched to a halt and he grabbed a rail as Nine lurched down Corso Casale to Sassi and the funicular railway  "Where are you going Nine?" asked the Wabbit through clenched teeth. "The scenic route," said Nine. The Wabbit had to laugh. "We're in a tunnel," he said, "and we're not supposed to be here." "Pretty, isn't it?" said Nine. "I never get to go in tunnels." "Well you should have been a train," said the Wabbit. "It was my parents' fault," said Nine. "I wanted to be a train but they said a tram was a steady living and it was local." The Wabbit felt a throbbing in his foot, which meant he thought his leg was being pulled. "I rather like tunnels," he said chattily. "There's a nice sense of enclosure." "I used to take a psychiatrist to the hospital every day," said Nine, "and he was a mine of information about tunnels." "You know all about them, then," said the Wabbit. "Always assuming  I agree," said Nine, "I'm a follower of analyst Carl Jung myself." The Wabbit smiled. "So what did you learn, Nine?" "The light at the end of the tunnel," said Nine, "is a new life."
at October 04, 2013