3. The Wabbit and the Grey Zone 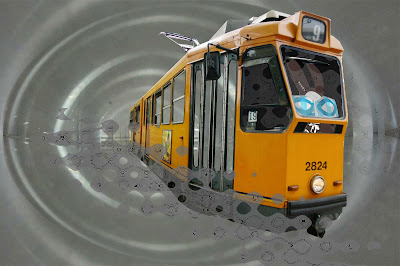 The Wabbit was fascinated with red buttons and never failed to press them, usually with unexpected and occasionally unfortunate results. Now he stared from the driver's cabin at a sea of grey and no matter what he did with the control handle, the tram floated gently through grey space. "What the Binky?" muttered the Wabbit. The voice of Nine, the Number Nine Tram sounded spooky in the void. "You pressed the red button and I'm afraid we're in the Late Tunnel." The Wabbit breathed in and out to become mindful of his breath. But he had never got the hang of it and was only mindful of grey. "What on earth is the Late Tunnel?" he sighed. "The Late Tunnel," said Nine, "is an emergency zone where we can go if we are irremediably late." "To hide from an inspector?" asked the Wabbit. "No, to make up time," said Nine. "We reappear at a distant fare stage as if we hadn't been late in the first place." The Wabbit thought of his city travels for a minute. "That explains quite a lot," he said. "How long will we be here?" "Oh, there's no time in here," said Nine. "Just relax." "I suppose it could be enjoyable," said the Wabbit, counting his breaths. "Oh it is," said Nine, "except for the Creatures."
at October 25, 2013