The Wabbit & the Contemplative Wall 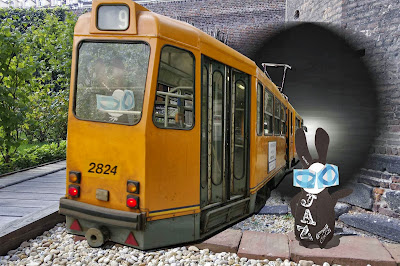 The Number Nine Tram suddenly reversed, plunged back into the tunnel and burst through a wall. Then with a hiss of compressed air he shuddered to a halt. The Wabbit looked out. "This is my secret garden," he said. "I come here to contemplate." "And look! There you are over there," said Nine the Tram, "but why are you touching the wall?" The Wabbit watched himself for a while. "I touch the wall," he said, "because it's very old and emits some kind of vibration." Nine was silent and waited for the Wabbit to continue. "This is a defended space," said the Wabbit. "It's a quiet little world and the wall keeps things out." "And in," said Nine. The Wabbit thought for a moment. "Yes it does," he murmured. "Things I consider here, I keep very much to myself." "It's your sacred space," said Nine quietly. "When I'm here it belongs to me," said the Wabbit and he looked down the compartment with a question on his lips. "Are you a Hop-on Hop-off Tram?" he asked. "I'm a Hop-on Tram," said Nine. "Hopping off is a matter of negotiation." The Wabbit wriggled. "Could I hop off for a second?" "Why?" said Nine. "I need to go to the toilet," grinned the Wabbit.
at October 11, 2013