The Wabbit and the No. 9 Tram 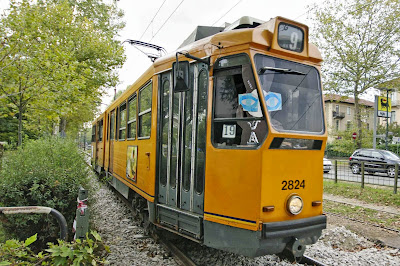 On the way from the Adventure Caffè, the Wabbit seized a chance to drive the No 9 Tram. This was something he had always wanted to do, but somehow the opportunity had eluded him. On this occasion he was successful, but it had cost the Wabbit a considerable amount - all the lunch vouchers he had in his fur and the promise of a gala dinner. Still, the Wabbit was satisfied and he switched on the power supply, released the brakes and pushed the control handle. The tram slid smoothly away from the stop and the Wabbit smiled as it glided at a leisurely pace. Occasionally the Wabbit would switch the points with a button on his console and listen to the snicking noise as the tram proceeded. "Oh I do like trams," murmured the Wabbit to himself. "Yes, so do I," said the Tram, "and do be careful wth my controls. I've just had a service." It had been some time since a vehicle had spoken to the Wabbit and he frowned. "What's your name?" he asked cautiously. "Nine," said the Tram. "OK Nine, nice and easy does it," said the Wabbit. A compressor hissed. "I feel like a jaunt," said Nine. The Wabbit saw the power notching up and he clenched his 28 teeth. "Here we go again," he muttered.
at September 30, 2013