4. The Wabbit of the Stockyards 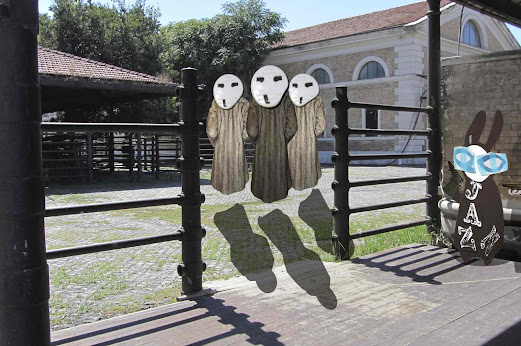 This looked like a stockyard to the Wabbit and his fur crawled. Something deep in his species memory scraped him with sharp claws and he shrank into a corner and pulled out his automatic. "I don’t like the smell of this," muttered the Wabbit and his nose twitched. He could smell rust and brick and wood, but there was another thing - something from the past. The odour became palpable. The smell of rubber hoses and drains, a damp smell like old gaiters long abandoned in a dank cellar. It was only then that he heard them. There were three and they floated a half metre above the cobblestones. The Wabbit’s ears pricked up and he strained to understand the short series of moans and crackles that hung in the air like ghostly static. He picked up single words. Packers, breeders, consignment, merchandise, livestock. His paw gripped his gun tightly as the spectral voices became clearer. "Ghastly business we’re in," said one, "I can hear the creatures bellow." "We meet demand," said the other. "It's not as if it’s us who eat them," said the last. The Wabbit's ears grew hot and he gritted his teeth. A hard object poked him in the ribs. He knew for sure it was the barrel of an automatic and it certainly wasn't his own. Then a voice. "Stay completely still and don’t move a hair."
at September 11, 2013