9. The Wabbit suggests a Deal 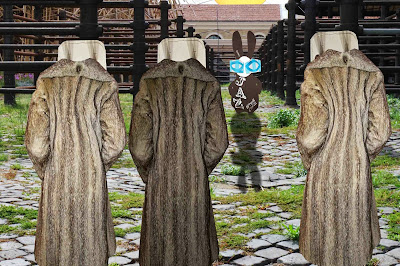 The Wabbit hopped out into the sun to face the Slifts. "I hope you took that offer of the Fake Fur Futures," he called. "We didn’t," snorted the Slifts. "Then that was ill-advised," said the Wabbit and he snorted too. Looking down, he flicked imaginary lint from his own fur then looked up. "Futures are what the future’s all about, you know." "But we bought the fake furs," said the Slift leader.  The Wabbit stared in mock astonishment. "What on earth did you pay?" he chortled. "A Zillion Gazillion," said a Slift too quickly. The other glared at him menacingly. "For the consignment?" asked the Wabbit. "No, each," they said together. The Wabbit’s eyes went wide. "I have very bad news," he said. "There's been a double-dip recession. The bottom’s just fallen out of the fake fur market." "What about our money?" asked the Slifts. "Don’t tell me you actually spent it," asked the Wabbit and he spread his paws wide. "Please, please tell me you didn't hand over actual cash." The Slifts nodded. The Wabbit shook his head sadly. "I’ll take the fake fur off your hands - and I promise to pay you in the future," he said. "Call it a special investment. Think of it as money in the bank." "I'd really rather not," said the Slift Leader.
at September 22, 2013