1. The Wabbit and the Fashion Poster 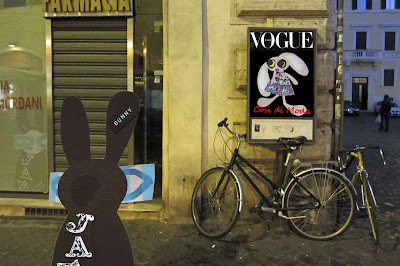 One evening the Wabbit was out for a constitutional hop and that entailed stopping at several points en route for carrot aperitivi. As he hopped, he mused on old missions and smiled in a satisfactory manner, wondering what mysterious adventure life would throw him next. It was just getting dark as he rounded a corner into a favourite square that was to be his last port of call before he headed home. "What the binkie is going on?" he exclaimed. Several people looked around and seeing nothing but a rabbit looking at a poster, continued on their way. But the Wabbit stared and stared at the poster. "No-one told me anything about this!" he complained. "I am always kept completely in the dark." Now it wasn't at all true that the Wabbit was always kept in the dark. In fact, it was usually the Wabbit who kept others uninformed - sometimes under orders, sometimes for their own good and sometimes for entertainment. He considered for a moment. "Lapinette told me nothing of this, so perhaps it's meant to be a surprise." The Wabbit's eyes glinted. "I'm going to say nothing," he murmured, rummaging in his fur for ancient press credentials that were long out of date. "The surprise will be on Lapinette," he grinned.
at September 04, 2013