8. Lapinette and the Fake Fur Futures 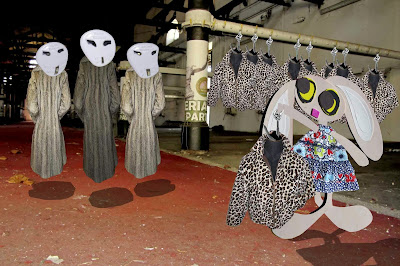 In a slaughterhouse at the other end of the stockyards, the three commodity skinners hovered threateningly as Lapinette hopped up and down. She was holding a fake fur jacket and she gushed in an ecstatic manner. "Quite terrific, fantastic," she murmured. "Awfully, awfully good. Just the job." "They're completely fake," said the leader. Lapinette smiled sweetly. "Better than the real thing, much better. Everyone's wearing them, even Lady Gaga." "Who?" asked another skinner. Lapinette ignored him and carried on. "Tyra Banks?" she tried. "Never heard of her," said the skinner on the right. "Elle MacPherson!" gasped Lapinette, who was running out of steam. "Ah, now youre talking," said the leader and he fumbled in his fur coat. Lapinette gaped. "Are you Time Travellers?" she asked. "Because I have a nice line in Fake Fur Futures. Invest with me and I guarantee you'll triple your money in 900 years." The skinners shook their heads. "Well, the fact is there isn't any real fur available," snapped Lapinette. The skinners growled. "How much?" "A Zillion Gazillion," said Lapinette. "For the consignment?" asked the leader. Lapinette paused and thought of the Wabbit. "Each," she grinned.
at September 20, 2013