2. The Wabbit and the Fashion of Fur 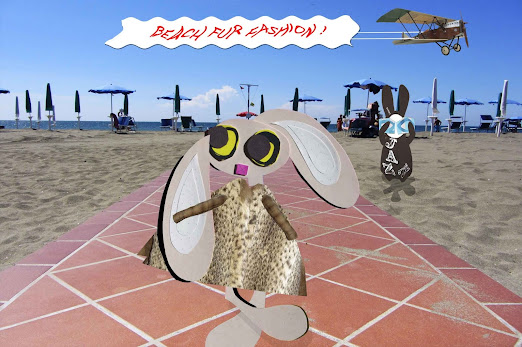 It wasn’t difficult for the Wabbit to crash the event. With a paw over the date, he flashed his ancient press card and hopped across the beach. "I’ll never get the sand out of my fur," he grumbled. Worse was to come. Amidst much attention, Lapinette was modelling a strange garment. "It’s a fur coat," muttered the Wabbit with astonishment. The Wabbit knew several things. He knew Lapinette already had perfectly good fur. His fur could feel the beach was baking hot. And the campaign against the fur trade was dear to their hearts. He glanced up at a familiar sound to see Susan the Biplane trailing a fashion banner. The Wabbit flinched in the sun's glare. "I really am in the dark." So the Wabbit ignored the temperature, watched Lapinette strut the runway and had a think. He examined all the options. "Lapinette is up to something," he murmured, "and I’m going to get to the bottom of it." He was gripped by a flash of inspiration. "I have it!” thought the Wabbit. "Now what’s that thing models do – smize?” He fluttered his eyes and although he felt foolish, loped gracefully forward himself, raising his paws higher than was strictly necessary. "I can model my own fur and get on the inside," he grinned. "Then I won’t be in the dark." He heard a polite clapping. "Fur whom the bell tolls," he grinned.
at September 07, 2013