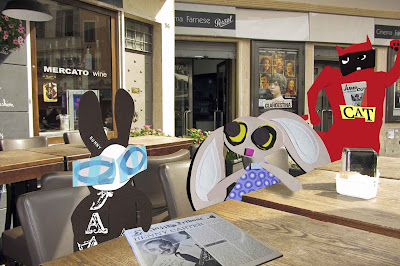 The Wabbits positioned themselves in a caffè outside a cinema and waited for Skratch the Cat to emerge. Then they pretended they didn't see him. "Hello!" cried Skratch. "Hello! I'm over here!" "Oh, hello Skratch," said the Wabbit, smiling. "What a surprise to see you here." Lapinette hid a giggle. "I was at the movies," said Skratch, "I viewed Infanzia Clandestina." "That's an interesting film," said Lapinette. "The violent scenes were filmed using cartoons." "It should have had an Oscar for that," said Skratch, "but we were excluded as usual." "It has already been done," said the Wabbit, "It was in the early jazz days when Louis Armstrong was in a cartoon." Skratch nodded in agreement. "It's a controversial area," he exclaimed. He paused and pointed. "What's that you have there?" "It's an ancient jazz album," said the Wabbit. "Can you play it?" asked Skratch. "I need a phonograph," smiled the Wabbit. "I know a market where we can get one," replied Skratch, "and by the way, that Blues Bat adventure was a fine example of music genre." The Wabbit grinned ear to ear. "Yes," continued Skratch, "you allowed the main character generous expression." "You sound like film programme notes," said the Wabbit. "I do it part time," laughed Skratch.
at September 02, 2013