10. The Wabbit in the Adventure Caffè 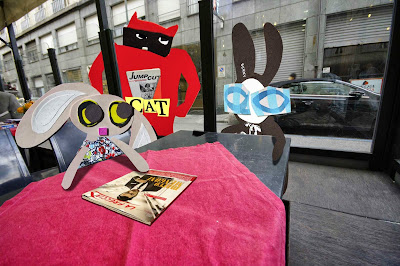 "Who's that?" asked the Wabbit. "Marco Mengoni of course." Lapinette, stabbed the magazine with her paw. The Wabbit looked quizzical. "He's a singer songwriter. He won the Italian X-factor," said Lapinette. "Oh really," said the Wabbit without enthusiasm. The Wabbit only liked old scratchy jazz records that he found in markets."Don't let Skratch see it," he said. "He'll give us a lecture on popular culture." "Too late!" said a familiar voice. "That Mengoni fellow has a sort of captivating meaow." "Oh hello Skratch," cooed Lapinette. "You tell us what kind of adventure we just had." "An interesting Brechtian escapade," said Skratch. "You certainly made your point." "Oh thanks," said the Wabbit smiling. "Well you made it rather a lot," purred Skratch. "But it was accessible enough." "Anything else? "asked the Wabbit with hesitation. "It looked good," said Skratch. The Wabbit's face fell. "But nothing, however good it looks," quoted Skratch, "should be termed good unless it is." Now the Wabbit really grinned. "Thank you Skratch, you're a most intelligent feline." "Any more good quotes, Skratch?" asked Lapinette. Skratch paused. "There are some with brains and some without," he said. "It makes for a better division of labour."
at September 25, 2013