3. The Wabbit and the Watching Brief 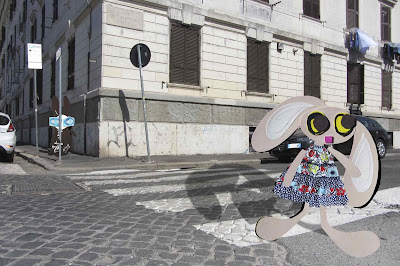 The Wabbit followed Lapinette closely and remained completely unobserved. As a secret agent, that was his job. At the same time, it was Lapinette’s job as a secret agent to spot him. But she seemed so intent on her journey that she didn’t seem to notice the Wabbit on her tail. He followed her all the way from the seaside and into an old industrial neighbourhood in the city. All this time, the Wabbit stayed a discreet distance behind while theories raced though his head. What on earth was her destination? "It might be another fashion show," thought the Wabbit. Perhaps she was going to meet a different kind of agent altogether - a fashion industry agent who pocketed 30 per cent of her vast earnings. The Wabbit considered and glanced around the area. It had seen better days and although it was under development, it didn’t seem like a fashion industry sort of place. But he remained icy calm and hopped quietly along the sidewalk in pursuit as Lapinette crossed the road to an old building. It looked like an abandoned railway station, but on closer inspection he reckoned it was a factory or a warehouse. The Wabbit stopped, looked for another way in and changed direction. "Uptight, out of sight," he hummed.
at September 09, 2013