6. The Wabbit and the Change of Plan 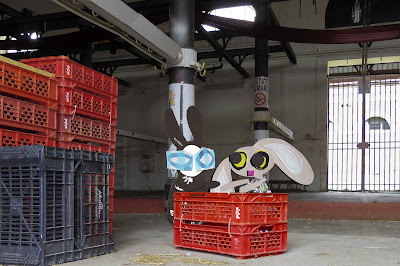 The Wabbit and Lapinette sat down at a beer crate to discuss a change of plan. The Wabbit said that Lapinette’s plan wouldn’t work because the creatures were too bright. Lapinette said that she could persuade them with feminine guile. The Wabbit responded by saying that usually worked, but in this case the Slifts were impervious. Lapinette asked why. The Wabbit argued that where matters of profit were concerned, only one thing worked. Lapinette rapped the crate with a paw and asked what that could possibly be. The Wabbit shrugged. "Force," he said emphatically and he hit the crate so hard that it shook and bits fell off. Lapinette sighed. "What do I have to do?" she asked. The Wabbit advised Lapinette that she should stick to the first part of her plan, but to raise the price of the fake fur to an unimaginable level. "What will you do?" she asked. The Wabbit shrugged again. "I will make any alternative impossible."  "The Slifts won’t like it," said Lapinette. The Wabbit drew back his lips and 28 teeth sparkled in a shaft of light that sliced through a hole in the roof. "Rock the Kasbah," said the Wabbit.
at September 16, 2013