5. Wabsworth and the Flavour of Spam 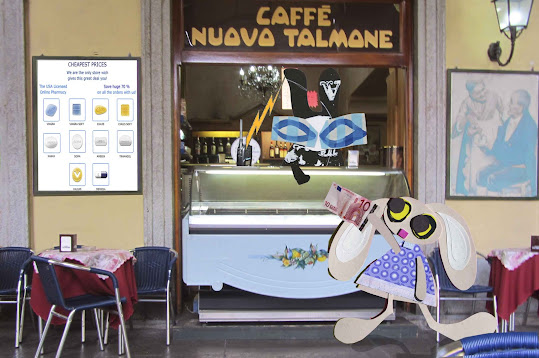 The Wabbit’s android double, Wabsworth, was working undercover selling ice cream when Lapinette came hopping through the porticos. "Hello Wabsworth," she smiled, "any news from the front?" "Nothing but spam on the wire," said Wabsworth. "But I’m sure the Commander is on the tippety-top of things." Lapinette raised both eyebrows. "He’ll track the spammers down, Spaminette," said Wabsworth in a soothing tone, "so don’t you worry." "Well, I’ll just have an ice cream while I’m waiting," said Lapinette. "I’ll have artichoke flavour please." Wabsworth frowned.  "I’m sorry, I’ve only got ..." " Spam," groaned Lapinette.  "It’s not just spam," said Wabsworth, "It's succulent, dried spam, sweated in the heat of the midday sun." "What about the flies?" said Lapinette. "They’re extra," said Wabsworth, Lapinette hopped from one foot to another. "What else?" she snapped. "OK, I have sweet chili spam," said Wabsworth. "Grrr," said Lapinette. "Or there’s goatball spam, or pongy onion and garlic spam." "I have a meeting to go to," yelled Lapinette and she stamped her foot crossly and sighed. "I’m fed up with spam, Spamsworth. "I could sprinkle spamsamic vinegar on the top," said Wabsworth. "I don’t like spam, I don’t want spam," yelled Lapinette, "and the sooner Skratch and the Wabbit get to the bottom of the spam, the better I will like it." Suddenly there was a hissing sound. Wabsworth’s ears pricked up and he glanced sideways at his walkie talkie. "Now that sounds like news on the shortwave band," he grinned.
at December 07, 2012