6. The Wabbit and a Favour for Spam 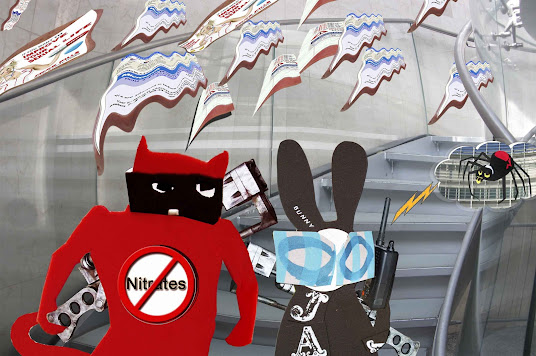 Suddenly a vast swarm of spam wheeled towards Skratch and the Wabbit. "Pointy spam!" shouted Skratch. "Run!" shouted the Wabbit and they fled into the building and down a staircase. But the staircase began to warp as the spam swarmed down. A menacing sound split the air and Skratch bellowed above it. "Do you have any favours to call in?" "I don’t want to call one in!" yelled the Wabbit. "Aaagh. Why not?" screeched Skratch. "Then I'd be even," gasped the Wabbit. "Even is good," shouted Skratch as a pointy spam grazed his ear. "I like to be uphill of even," rasped the Wabbit, hopping rapidly down the bending stairs. "We don’t have a choice," screamed Skratch. "Choice" echoed and echoed above the wail of the spiky spam. The Wabbit pulled his walkie talkie from his fur and yelled, "Wabsworth, Patch her through!" "Are you certain commander?" "Patch! Her! Through!" growled the Wabbit as a spiky spam hurtled between his legs. The radio whined. "Commander, I told you so," said the silky voice of Duetta, the Red Spider. The Wabbit didn’t have a clue what she meant. "We need your help," muttered the Wabbit. "I can't hear you," sang Duetta. "We need your help," screamed the Wabbit. "I’ll be right over," said Duetta. The radio went dead and Skratch glanced at the Wabbit. "Whats up, Doc?" he shouted. "We’re going to get techie," said the Wabbit.
at December 10, 2012