1. The Wabbit and Philosophers Rocks 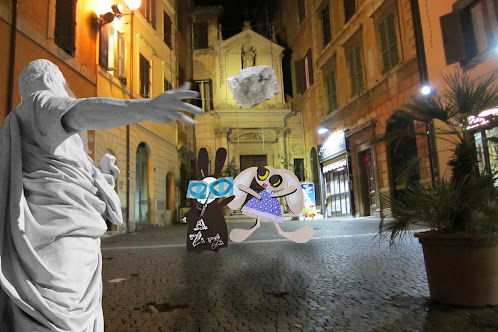 The Wabbit and Lovely Lapinette arrived in Rome well ahead of the rest and immediately found themselves in the thick of the action. "There he is!" yelled Lapinette. "Look out!" shouted the Wabbit as a missile whistled past their heads. "Hey you!" called the Wabbit as another rock came crashing his way. "Do knock it off!" "I know that guy," said Lapinette. "Personally?" asked the Wabbit, dodging again. "I know of him, he’s a philosopher." "Philosophers don’t throw rocks," shouted the Wabbit, "they sit and think." "His name's Cicero!" shouted Lapinette. "Kicker-oh is right!" raged the Wabbit looking round for a loose cobble. "He’s a menace." "Where’s my stone?" shouted Cicero. "Give me back my stone!" The Wabbit threw a small cobble and the man disappeared round a corner. Lapinette scowled and kicked the Wabbit in the shins. "Now we have to chase him." "He won’t get far," said the Wabbit, reaching in his fur for his walkie talkie. "All personnel, man in white possibly Cicero, heading your way." The radio crackled. "Watch out for big rocks," shouted the Wabbit, The radio crackled again. "No not socks!" he yelled, thumping the radio with his paw. Lapinette nudged the Wabbit. "Cicero says it’s better to receive than inflict an injury."  The Wabbit’ eyes went wide then met in the middle. "And the philosopher's stone turns lead into gold," she added. "That’ll come in handy," said the Wabbit.
at December 24, 2012