4. The Wabbit and Combination Spam 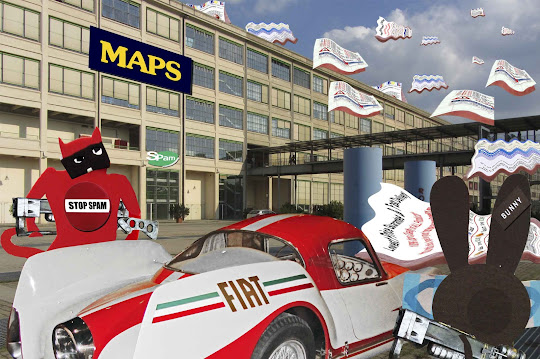 Tracking the shortwave spam signal, Skratch and the Wabbit drove stealthily up to a strange building. "There's been a sudden demand for maps?" commented Skratch. "What on earth is that?" muttered the Wabbit, pointing to the objects sailing through the air. "It’s combination spam, Commander," said Turbina the Jet Car. "It’s particularly dangerous, so don’t get too close. And whatever you do, don’t eat any." The Wabbit screwed up his eyes and tried to read the messages, but he was too far away. "Use your special glasses, Wabbit," said Turbina. They all waited for an age while the Wabbit’s head movements suggested he was reading. "Hmm, yes I see," said the Wabbit. "I can help a widow in the third world and I will receive 3 billion euro," "Ha ha ha," laughed Skratch. "No, no," said the Wabbit. "All I have to do is send my bank details." "Anything else?" sighed Turbina. "Yes," said the Wabbit. "I may avail of a Rolex Submariner watch for a miserly sum." "They’re cheesy imitations," said Skratch, who had a real one. "Well what about this?" asked the Wabbit. "That mail there says that my pen is too small and that I can easily make my existing pen bigger." Turbina groaned but Skratch chuckled. "I have a perfectly good pen in my fur," continued the Wabbit, rummaging a bit. "In fact, I have three in case the other two don’t work." "Look Wabbit, they want you to buy pills," said Skratch. "Pills won’t make my pen any bigger," said the Wabbit. "I think it works with fountain pens," said Turbina.
at December 05, 2012