7. The Wabbit & Duetta the Red Spider 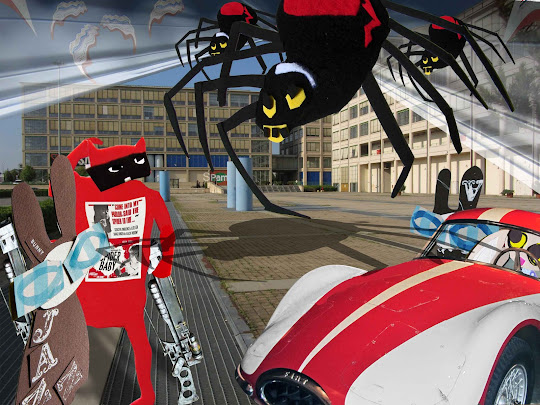 Skratch and the Wabbit emerged as Turbina screeched into the square with reinforcements. But the only way to look was up. Suddenly time froze as they were drenched in a violent light. "I can only keep them out for a short while," hissed Duetta. Skratch scratched his head. "I thought she was the last of the Red Spiders." "Look what thought did," grimaced the Wabbit. "You have five minutes to come up with a plan, Commander," said Duetta. "If the pointy spam break though my force field, they’ll torment us to death." "We need a spam filter," said the Wabbit. Duetta lost no time. "What about a digital filter with a cascaded series of second-order biquad sections?"  The Wabbit didn’t turn a hair. "Make it so," he barked. Lapinette nudged Wabsworth. "He’s very strict with Duetta." Turbina laughed. "He’d better be in charge of her, or she’ll be the boss of him." Lapinette looked at Turbina's dashboard curiously. "File number X3705 offers a complete dossier on the activities of the Red Spiders," she said, "but it’s restricted." "To who?" asked Wabsworth, making the sound of an owl. "Me!" snapped Turbina. "Turbina!" called the Wabbit. "Duetta needs to access your on-board computer." "Over my dead battery," said Turbina. "Then we’re all doomed," said the Wabbit. "It'll cost you new tyres," said Turbina. "OK," growled the Wabbit. "And a salad sandwich," said Turbina.
at December 12, 2012