3. Dragon and Cicero spot the Wabbit 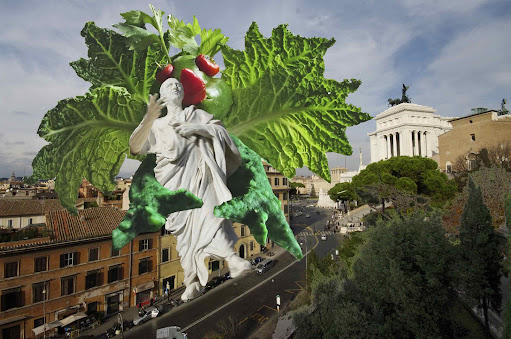 Dawn broke but there was no sign of the Wabbit. Terni the Dragon was tired of waiting, so he hoisted Cicero on board. "Can’t stay here twiddling our scales" he roared and he took off down the via del teatro di Marcello at high speed. "I say, said Cicero, "what’s afoot?" "We have to find Commander Wabbit. Something may have happened," roared Terni. "Perhaps he’s been set upon by those foul fiends," said Cicero, gasping as the wind tore at his toga. "The Commander would shoot them on sight," said Terni. "If there’s anyone he hates, it’s the Agents of Rabit." Cicero nodded gravely. "Good view from up here," he observed. "I can see what’s left of the Senate." "How did you get here anyway?" asked Terni. "One moment I was speaking at the Forum with that dreadful bore, Clodius and the next I was sitting in a fearful dive opposite the Theatre of Marcellus." "Must be a hole in the fabric of time," said Terni, "but you’ll need to ask the Wabbit." "A scientist too?" asked Cicero, "is he melancholic?" Terni laughed so much he nearly dropped his precious cargo. "He can be bad tempered," he said, "and he’s going to be livid if we don’t find him." "Look!" said Cicero. "Is that him, going the other way?" Terni glanced down. "Grrr!" he roared and his wings beat furiously as he dived to the ground towards the Wabbit.
at December 27, 2012