3. The Wabbit and the Short Wave Dial 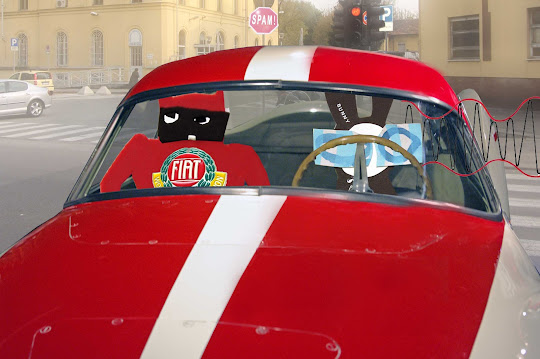 Turbina the Jet Car turned onto Corso Svizzera. The Wabbit felt that was a good place to look for the source of the spam invasion - and both he and Skratch glanced to right and left in search of a clue, without success. "Where would it all start?" murmured the Wabbit, "it has to come from somewhere" "It doesn’t sound like any of our enemies," purred Skratch. "No, it’s not their meat and two veg," said the Wabbit, "this is highly invidious." "And insidious," added Skratch. "Enough of the big words and more action, boys," said Turbina. "What about some sounds, Turbina?" asked Skratch. "I would oblige," said Turbina, "but I’m swamped with static. There’s nothing on the air." The radio crackled and whined and whistled. "Try Short Wave," suggested the Wabbit. "But there was only a quiet hissing sound. "Try 19000 kiloHertz," said the Wabbit. Suddenly Lapinette’s voice broke through. "This is the Voice of the Department of Wabbit Affairs," she said solemnly. There was a pinging sound and after a very a long pause, Lapinette’s  voice spoke again. "This is the Voice of the Department of Wabbit Affairs." Then the ping pinged again. "I’m not sure how long I can take this," said Turbina. Skratch shook his head. "Well, it’s not spam," chortled the Wabbit. "Just run through the dial, Turbina." There were a few squeaks and squawks and then they all froze. "Spam spam spam. Poing! Spam spam spam. Poing!  Spam spam spam. Poing!" Can you get a fix on that, Turbina? said Skratch. "I can," said Turbina. "Silent approach," said the Wabbit.
at December 03, 2012