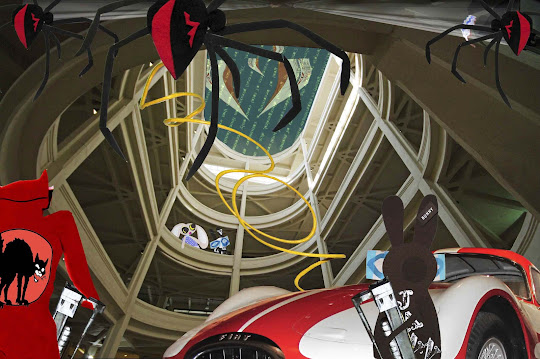 Connected to Turbina the Jet Car’s on-board computer, Duetta created a digital filter across the roof of the Great Spiral Ramp - and they all watched as the pointy spam drew close. Some of the spam was huge, but the filter held and one by one they stuck fast. All except for a single spam. "A blighter got through," shouted the Wabbit. Duetta snarled a command to a confederate. "Round it up and hold it for questioning!" Up on the ramp, Lapinette and Wabsworth watched a Red Spider clinically capture the spam and inject it with venom. "I said hold it for questioning, not eat it," shouted Duetta. Skratch looked at the Wabbit and the Wabbit raised his eyes skywards as the Red Spiders detained any spam that somehow made it through. "I wouldn’t like to be spam today," said Skratch. "No, there’s a nip in the air," said the Wabbit looking across to Turbina. "My computer is at the limit of its capacity," she said, "and I’m trying to keep Duetta out of my database." "Cut her off," said the Wabbit, "her job is done." The filter froze in place with its cargo of trapped spam and the Red Spiders clicked and hissed in satisfaction. Then there was silence. Lapinette was speaking in Wabsworth’s ear but in the still her whisper was a shout. "Is the spam dead, Wabsworth?" "I’m not sure how sentient they were," replied Wabsworth. "They’re dead but not as we know it." "Hey Wabbit!" said Skratch. The Wabbit turned and Skratch mimed a camera. "If I saw this in the movies, I wouldn’t believe it!"
at December 14, 2012