9. The Wabbit & Prisoners from Spam 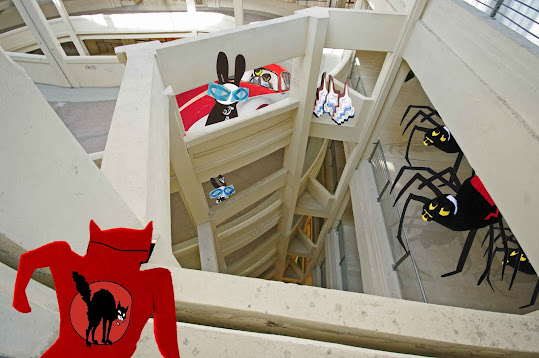 Skratch observed the whole thing from a suitable vantage point and for once, felt like a feline cat. His ears pricked and swivelled from the Wabbit to Duetta and the spiders. "Oh here’s his Wabbitness," whispered a spider. "Salute your superior officer, or I’ll dismember your limbs," snapped Duetta. The spiders cringed back and made wavy signs at the Wabbit. Skratch gazed as the Wabbit returned the salutes. Then Duetta bowed to the Wabbit. "You first," she said, nodding towards the unfortunate spam. The Wabbit's voice boomed, "Spam, give us the names and addresses of all your sources!" "You so need a bigger pen," said a pointy spam. The Wabbit sighed and nodded to Duetta. "From whence did you come?" she snarled. "24 hour online pharmacy," said the spam. There was a strained silence and Skratch watched in awe as Duetta shrugged. Her head turned to the Wabbit and for just an instant their eyes met equally, then blinked. "You may as well eat them," said the Wabbit. Duetta shuddered. "I hate the taste of spam," she said. "Oh, go on, go on," smiled the Wabbit, rummaging in his fur for a jar of brown sauce. "Not even with peanut butter," scowled Duetta, "perhaps may I call you Wabbit?" "OK, Marshall Duetta Spyder," grinned the Wabbit. "My brigade is at your command, Commander," said Duetta silkily. Only Skratch noticed the Wabbit’s look of surprise. But the Wabbit's voice was calm. "And from me in return?" "Leadership," replied Duetta.
at December 18, 2012