The Wabbit and the Trope Trick 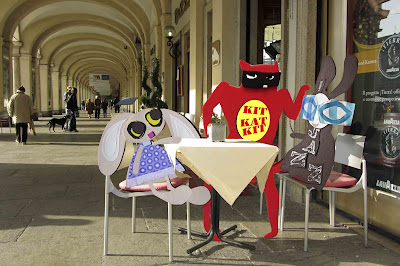 As the friends waited on drinks to arrive, Skratch stood up and patted the Wabbit. "May I say," he boomed, "what at an excellent adventure that was." "You may," said the Wabbit, winking at Lapinette, "but you also have to tell us what kind of adventure you think it was." Seeing his cue to make a speech, Skratch didn’t hesitate. "It was a noir of course!" The Wabbit cocked his ears and his eyes twinkled. "It started in the rain, then a spider woman appeared with a plan and there were shadows," said Skratch with enthusiasm. "Is that how you tell?" smiled the Wabbit, nudging Lapinette under the table. "Yes," said Skratch, "these are familiar tropes, exquisitely handled." "Oh Skratch, you silly sausage," said Lapinette. "What on earth is a trope?" The Wabbit leaned forward. "Skratch is referring to figures of speech expected by the audience, metaphors if you will." Now it was Lapinette’s turn to lean forward. "You mean the adventure all meant something else?" "Nearly," said Skratch. "Because of his desire for adventure, the Wabbit allowed himself to be drawn into something outside his control." The Wabbit nodded gravely as Skratch continued. "We know that Duetta’s shadows were reflections, denoting her possible duplicity." "Do go on," said Lapinette, and pretending to make notes, she kicked the Wabbit’s foot a little too hard. "Ouch" said the Wabbit. "There you are!" said Skratch, "that was a Wabbit trope."  The Wabbit slapped a paw to his head. "If I give him enough trope he’ll hang himself!" "That was a meme," said Lapinette.
at October 26, 2012