The Wabbit and the Red Spiders 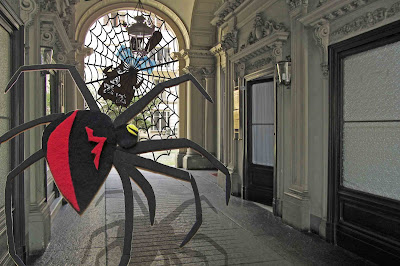 The Wabbit hopped inside an entrance to get out of the rain and ran straight into an enormous web.  And the more the Wabbit struggled the more trapped he became. He reached into his fur for a multi-purpose tool that he bought in a market (and never used) when a shadow passed. The Wabbit found himself looking at a giant spider and the spider was staring back at him. Then both shrank away in surprise. The spider was first to recover. "Name, rank and number," she commanded. "Wabbit, Commander, 007/392," said the Wabbit. "Of the 400 Rabbits?" asked the spider. She stiffened to attention and gave a wavy salute with one of her eight legs. "I’m afraid you have the advantage of me," said the Wabbit, who had found the tool he wanted and was now cutting his way free. "I am Marshall Duetta Spyder of the Ragni Rossi" said the spider, "what on earth are you doing in my web?" "Ragni Rossi ...," murmured the Wabbit, considering his mental catalogue of irregular forces. "That's the Red Spiders. Didn’t you disband?" "Certainly not," continued the spider. "We continue underground and in the very interstices of the city." "Against the forces of WASP?" remembered the Wabbit. "They remain the menace they always were," said Duetta, "and my web was meant for them, not a rabbit." "That’s Wabbit - with a W," said the Wabbit. "And I am Spyder with a Y," said Duetta and then she paused and thought.  "Perhaps we should consider an alliance?" "Alliances come and go," shrugged the Wabbit. "But we should seize the time," stressed Duetta. "Well, while we’re seizing it, could you help me down?" said the Wabbit.
at October 08, 2012