The Wabbit and the Blue Vial 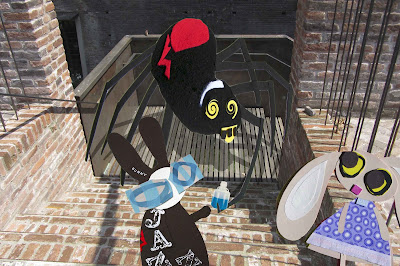 Lapinette, the Wabbit and Duetta the Red Spider met in a hidden corner in a Palace in the centre of town. Looking over his shoulder, the Wabbit handed Duetta a small vial of blue liquid in a manner that can only be described as shifty." Duetta pounced on the vial immediately. "Did you mix it to my exact specifications, Commander?" she asked imperiously. The Wabbit nodded and then looked around cautiously. Lapinette scowled. "Did you wear gloves as I suggested?" she said. The Wabbit stared at Lapinette and his eyes narrowed, then suddenly flashed enormously wide. "I am the Rabbit God!" he cried. Duetta rattled her legs but Lapinette stamped a foot and shook a paw at the rabbit. "Of course," grinned the Wabbit, "I always keep keep sterile gloves in my fur."  Lapinette placed her paws on her hips and looked seriously at the Wabbit. "In case of forensic emergencies," he explained. Duetta ignored this badinage and grasping the vial, drank the contents in a single gulp. The Wabbit and Lapinette turned to watch Duetta, expecting something major to happen, but Duetta merely smiled. “Now we must hasten to a high place and prepare,"  she stated. But while Duetta sounded normal, her eyes started to revolve. And although they were whirling in spirals they easily captured Lapinette’s gaze. Lapinette looked into the spirals and couldn't take her eyes away. Her head begin to swim and she felt slightly dizzy. "What can you see?" she asked in a quivering tone. "Perfection," said Duetta.