The Wabbit and the Upset Rain 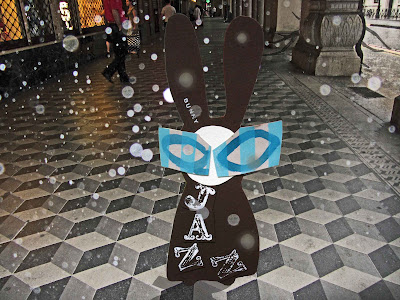 The Wabbit hopped down the Via Paolo Sacchi with his paws deep in his fur and as he hopped he complained. "I hop a tiresome hop," he muttered and he attempted to hop a pattern across the Escher-like frames on the sidewalk under the porticos. The Wabbit hated the rain. It was no secret that when the rain started, the Wabbit would bolt for cover and it was the fundamental reason he liked the porticos. When the weather was wet and inhospitable, he could hop for as many as 18 kilometres without sullying his fur. In this way he could hop in a complete circle across the city without as much as a single wet hair. But this wasn’t one of these days. Every evening for what seemed like months, the rain had hurtled down like bullets and that evening it bounced horizontally from the road, ricocheted into the porticos and straight onto the Wabbit’s coat. "Grr," said the Wabbit and he tried to smooth his fur down. But that just made things worse and he felt damp and miserable. "Oh why can’t the Department send me on a new mission?" he muttered to himself.  "I’m bored and I’m wet and I’m in a bad mood.," He stopped for a moment and listened to the deluge smash on the road outside. He could hear something else. Something besides rain. It was faint, but his ears were keen and they swivelled around like antennae. It was a hollow sound, somewhere between a rattle and a tick. "Even the rain sounds annoyed," grumbled the Wabbit.
at October 05, 2012