The Wabbit and the Spider's Plan 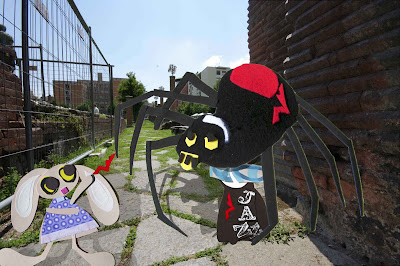 "Marchesa Lapinette of the Department?" said the spider, "Marshall Duetta Spyder at your service!" "The Red Spiders seek an alliance against the WASP," explained the Wabbit. "The Red Spiders," said Lapinette gently, "didn’t you disband? " "We fight on," said Duetta, making a complicated wavy sign with a front leg. Lapinette nodded and brought consideration to the matter in paw. "What of the Glistening Web Tendency?" she said gravely. "Captured," said Duetta. "The Fund Raiser faction?" queried the Wabbit. "Its members decided to be bank robbers," said Duetta. "Eternal Combat?" suggested Lapinette. "Sold out to the enemy for a pittance," replied Duetta. "Never-ending Web?" asked the Wabbit. "Wiped out by a chewing gum disaster in 1987," said Duetta. "So how many of you remain?" said the Wabbit in a matter of fact voice. "A few," murmured Duetta. Now Lapinette spoke sharply. "How many?" Duetta lifted her head proudly. "Just me! But I can replicate rather quickly." "The WASP are many," stated Lapinette. "And tenacious," said the Wabbit. "I have a plan," said Duetta. "Do tell," said the Wabbit, quivering with excitement. "It involves spinning fractal webs," she said. The Wabbit’s eyes glistened with delight but Lapinette eyes narrowed. "Webs aren’t fractals," she said categorically. "Mine are," said Duetta, "depending on my diet." She passed a badge to Lapinette and rattled her legs as Lapinette pinned it to her fur. "Now what shall we call our alliance?" "The Spin Hopsters," smiled the Wabbit.
at October 10, 2012