The Wabbit and the great Leap 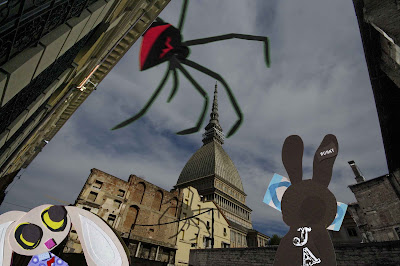 The three raced across the city at high speed, the Wabbit and Lapinette loping quickly to keep up with the rapid scuttle of Duetta - who made straight for the highest place in the city, the Mole Antonelliana. The Wabbit looked on as Duetta positioned herself on the side of a nearby building and then made the most surprising leap the Wabbit had ever seen. "Good grief!" said the Wabbit. It had been some time since the Wabbit had made his own surprising leap, which was from the the tip of this very building and it was out rather than up. "No helichopper required this time," muttered the Wabbit, "just look at her go." "Come on Wabbit, we need to fulfil our part of the mission," said Lapinette. "Where did you find our transport?" asked the Wabbit. "I pulled in some favours," said Lapinette. The Wabbit smiled because he was usually the one to acquire things in an unorthodox fashion. "How many lunches?" queried the Wabbit. "I don't know what you mean!" replied Lapinette. "How many did it cost you?" repeated the Wabbit. They both paused to watch Duetta land on the top of the spire. "A Gala Dinner," said Lapinette finally. The Wabbit suppressed a snort. "Am I invited?" he asked. Lapinette thought for a while. "As long as you don't make bad jokes at the wrong time," she said. "I seldom joke at a Gala Dinner," stated the Wabbit. Lapinette narrowed her eyes in disbelief. "How so?" she asked. "Too busy eating," smiled the Wabbit.
at October 16, 2012