The Wabbit over Turin 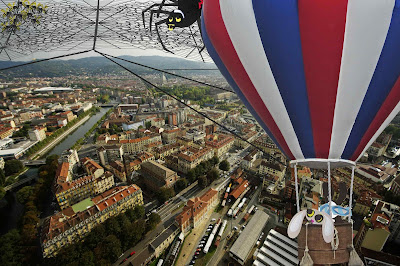 "Are you sure this thing's safe?" yelled the Wabbit and his 28 teeth chattered in the wind. "I was assured it was," shouted Lapinette. "By who?" screamed the Wabbit. "Skratch!" shouted Lapinette. The Wabbit flicked his eyes upwards to the hot air balloon and then out over the rooftops. "Oooh." he said as a geometric black shape appeared and hairy tendrils snaked out to connect with the balloon and several points on the city. "The last of the Red Spiders!" roared Lapinette and she gazed entranced as Duetta span a series of fractal webs across the skyline. It wasn't a moment too soon. The Wabbit pointed to a swarm of ferocious wasp-like insects flying rapidly in from behind the Turin Hills. Even from far away he could see their vicious stinging tails and he gave an involuntary shudder. The formation dived sharply but just as they seemed to be upon the allies, Duetta tightened her ties. The web changed shape and somehow became a living thing with a mind. It reached out to trap the wasps and the insects threshed as they became hopelessly enmeshed. They tried to struggle of course, but it was all for nothing. Gradually their threshing died away and they lay inert in the sinewy tendrils of the fractal web. "That was quick," said the Wabbit, "we can go down now." Lapinette shook her head and pointed. "Look over there!" she cried and the Wabbit looked to the right. There, flying over the Alps were three large formations of wasps, all of them much larger than the ones they had trapped so easily. "We need reinforcements," muttered the Wabbit.
at October 18, 2012