The Wabbit & the Prisoners' Protocol 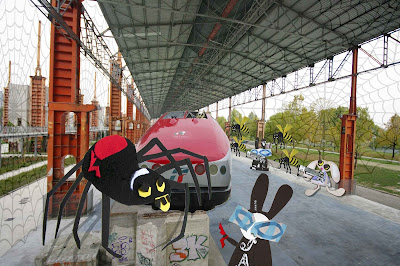 As the last of the surviving wasps were loaded into Quantum the Time Travelling Train, the Wabbit returned his badge of alliance to Duetta Spyder. "Marshall Spyder, since the battle is over and done, our alliance is now terminated," he stated tersely. "You are transporting them to the Sombrero Galaxy?" said Duetta. The Wabbit nodded. Duetta looked at the creatures. "I was rather hoping for a tasty wasp meal," she said, making gnashing noises with her teeth. The Wabbit grimaced. "We may one day be judged on the way we treat our prisoners," he said.  "But exile," said Duetta "is something of a waste." "It’s in the interest of biodiversity," quipped the Wabbit. "Not mine," said Duetta, rattling her legs. "Look, eating prisoners is just not the way we do things round here," snapped the Wabbit. Duetta looked at the Wabbit and softened and her voice became smooth and alluringly feminine. "All the same, I think I owe you something of a favour," she whispered in the silkiest of tones. The Wabbit did not respond because he felt an icy chill crawl across his fur. But as Duetta turned to go, he raised a paw in formal salute. "Goodbye, Marshall Spyder."  Swiftly, Duetta wheeled back and transfixed the Wabbit with eyes of steel. "Permission to speak frankly, Commander?" she asked. The Wabbit spread his paws wide. "Always," he said, automatically. "The trouble with you, Commander Wabbit - is that you think you’re God." The Wabbit shrugged and smiled the broadest of smiles. "I always aim for the best," said the Wabbit.
at October 24, 2012