The Wabbit and the Battle for the Sky 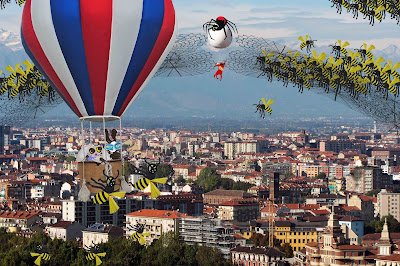 The squadrons of wasps were upon them in an instant and the sound was deafening. Then, from what seemed like nowhere, another balloon rose from the ground and connected with the fractal webs. The Wabbit gaped and shook his head, because hanging from the basket was none other than Skratch the Cat. Grabbing two web pieces, Skratch held them together to better trap the legions of insects and as the wasps smashed into the web, they became hopelessly entangled. But there were more and more and more. They kept coming in enormous numbers and in the mêlée, some found their way around the mesh. The Wabbit pulled an automatic from his fur and started to fire. Lapinette produced another and released a rapid volley of shots that saw several creatures plunge to their doom on the rooftops below. "Where on earth did you hide that gun?" growled the Wabbit as he sent one more wasp spiralling to the ground. "In my garments," she said and whacked a wasp that came too close. "How many are there?" yelled the Wabbit. "It has to be finite," said Lapinette and she calmly shot two wasps with just one round. "How do you do that?" asked the Wabbit. "Oh, stop asking questions and keep shooting," shouted Lapinette. "When this is finished, I'll buy the aperitivi," said the Wabbit. "Yes you will, because this alliance was your idea," replied Lapinette. She picked up a weight and leaning over the side, casually dropped it on the last trio of wasps. "I'll bet that gave them a buzz," said the Wabbit.
at October 20, 2012