2. The Wabbits take to the Sky 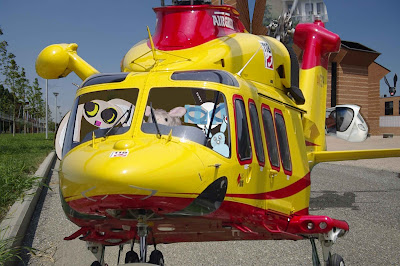 Lapinette kicked the tyres and lit the fires. A helichopper clatter echoed noisily around the square as she lifted off for a top secret destination with her top-level diplomats safely on board. Then she hovered while the Wabbit spoke to Wabbit Command. "Requesting clearance Command, from Corso Svizzera heading SE 54, 2000 metres," said the Wabbit. The radio crackled. "Take off agreed. Proceed with caution. There are power lines and a cooling tower. At your own risk, Commander. Out" "Out," said the Wabbit and he turned to Lapinette. "Mind the cooling tower," smiled the Wabbit. "They always say that," said Lapinette. "Go over the tower and pick up some thermals," suggested the Wabbit, winking. "May we loop the loop?" asked Pink Bunny. "Flight rules Ma’am," said Lapinette. "Your diplomatic mission is of the utmost importance." "It’s urgently urgent," agreed the Wabbit. "Da ist die Gefahr?" asked Rettet Kaninchen. "Danger? Not for you," said the Wabbit. "You’re in safe paws."  The helichopper chattered deafeningly as Lapinette throttled up. The Wabbit cut communication to his diplomats and spoke privately to Lapinette. "Did you notice anything on the ground," he asked. "I saw him," said Lapinette, "he’s just a scout." "But now they know where we’re coming from," said the Wabbit. "I think everyone knows that now," said Lapinette over the noise, "Did you adjust the swash plates?" she asked. The Wabbit nodded and grinned. Lapinette pulled the stick and the helichopper soared near-vertically into the sky. "Bravo Zulu!" * laughed the Wabbit.