1.The Wabbit and his Shadow 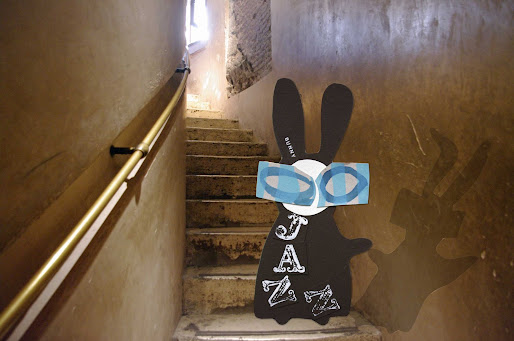 The Wabbit had been on the roof, thinking. And there were many things to think about. There were the wicked Agents of Rabit, who never left him in peace. There was his work for the Department. There were his leadership duties to his small band of willing helpers. Last but not least, there was the sausage question that had not been fully laid to rest. But that wasn't all - because of the list of things to do from more than a year ago. There had been so many additions! "Now the things that used to be at the end of my list are in the middle," sighed the Wabbit. The Wabbit stretched out a paw to his shadow on the staircase wall and touched it just for fun. "You're funny!" said his shadow. "I beg your pardon," said the Wabbit sharply. "Don't worry about your list, Wabbit." The Wabbit sat down on the stairs and looked at his shadow. "What exactly do you propose," he said with narrowed eyes. "What are you doing for fun?" asked the Wabbit's shadow. The Wabbit shrugged. "That's not a satisfactory reply," said his shadow. "You mean like playing unobtainable records from 1936?" suggested the Wabbit. His shadow started to laugh. "I mean exciting adventures," he said. "I can't always be having adventures," said the Wabbit. "Everything's an adventure," replied his shadow. "In that case, another will start in a minute," said the Wabbit, who was beginning to feel cheered. "Can I come?" asked his shadow with excitement. "Hard to get rid of you," chortled the Wabbit.
at March 06, 2012