The Wabbit and the Many Maps 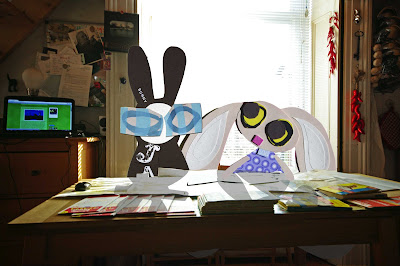 The Wabbit and Lapinette met to look at maps. The secret map of the Agents of Rabit contained a list of references to other maps, so Lapinette produced  her Big Map Box and emptied it on the table. “What about the original map?” enquired the Wabbit.  Lapinette pointed to her head. “I memorised it,” she exclaimed, “and then it was eaten.” “Oh,” said the Wabbit and he tried to think of what to say. “What did it taste like?” he asked finally. “I don’t know,” said Lapinette “I gave it to Big Blue Snail to eat. He said it was the most delicious map ever.” The Wabbit smiled and pored over the maps. “Greece, Germany, Ireland and ... Abu Dhabi,” he said with interest. “Abu Dhabi Agents of Rabit, “ sighed Lapinette.  “They certainly get around,” chuckled the Wabbit and he took some time to review all the locations on all of the maps. “I had one of these talking maps,” said the Wabbit suddenly. “Really, how did that work?” smiled Lapinette. “By satellite,” said the Wabbit. “You tell it where you want to go and it gives you  precise directions.”  “A GPS,”  said Lapinette. “I don’t know, it never worked for me,”  said the Wabbit. Lapinette looked questioningly and the Wabbit scowled. “Everywhere  I asked for,  it said, ”I’m as mystified as you.””
at March 02, 2012