3.The Wabbit and his Psyche 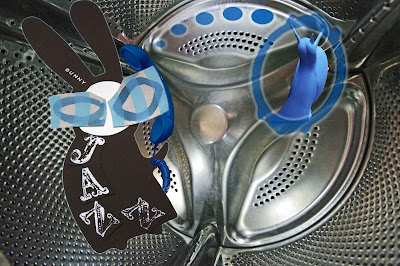 The washing machine drum started to tumble, and the Wabbit gripped his phone to communicate with his unconscious. "Hello, anyone there?" asked the Wabbit. He heard muffled sounds and a crackling, then suddenly a familiar voice boomed from the earphone. "Hello, who’s calling please?" "It’s the Wabbit and I know your voice - it’s Snail," said the Wabbit. "You’re very clear! You could be standing next to me," said Snail, "where are you calling from?" "I’m in my deep unconscious," said the Wabbit, "but what are you doing here?" "Nothing leaves the psyche," said Snail sagely. "If I’m in your unconscious, I must represent something important to you, Wabbit. Can you think what it is?" The Wabbit thought as the drum tumbled slowly. "Well, you’re stalwart and principled and I can always rely on you," he said. "That’s all very well," said Snail. "But can you think of anything negative?" The Wabbit thought hard for a small criticism that wouldn’t offend, but Snail seemed to know what he was thinking. "I won't take offence, Wabbit. I am merely a relational object amongst others in your psyche," he said soothingly. "OK," said the Wabbit. "you can be a bit pompous sometimes." "Pompous!"  said Snail. "How dare you! I think that rightly belongs to you." "I suppose," agreed the Wabbit and he thought again. "Snail, do you have a complaint about me?" "Yes," said Snail. "It’s your misplaced humour." "Ah!" smiled the Wabbit, "if I misplaced my humour, then it’s not lost and I’ll find it again soon." There was a long silence. "Do you see what I mean?" sighed Snail.
at March 08, 2012