The Wabbit faces them Down 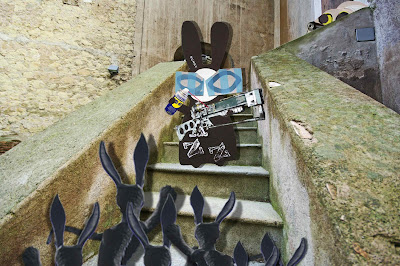 The Wabbit stood in the path of the snickering Agents of Rabit and casually took a can of WD-40 from his fur. He tossed it in the air, caught it and began to lubricate his laser gun. "I know what you're thinking." said the Wabbit, glancing up. "Huh?" said the leader of the Agents. "You're wondering whether I forgot to service my gun," said the Wabbit quietly. "Huh, uh?" said the leader of the Agents. He turned to his gang and they all shook their heads. The Wabbit shook his head too. "You're asking yourselves, "is it going to work?"" he drawled laconically. "Well, to tell you the truth, in all this excitement I kind of lost track myself. But being as the oil is WD-40 and this is a Snaser, the slimiest Laser gun in the whole wide world, you’ll slip and slide your way to Kingdom Come." The Agents jumped and talked confusingly, then looked back. "So  you've got to ask yourselves one question," continued the Wabbit. "Do we feel lucky?" The Agents turned to each other and hesitantly asked themselves if they felt lucky. Some decided they weren't feeling one bit lucky and decamped from the back. Lapinette smiled from her vantage point, but kept her automatic trained on the lead Agent. The lead Agent stared menacingly at the Wabbit. "Look behind you," said the Wabbit. "There's no-one left." The Agent glanced behind him and the Wabbit hopped quickly forward and pushed him over the parapet. "Luck," said the Wabbit to the few Agents remaining, "is when preparation meets opportunity."
at March 26, 2012