The Wabbit and the Brave Diplomats 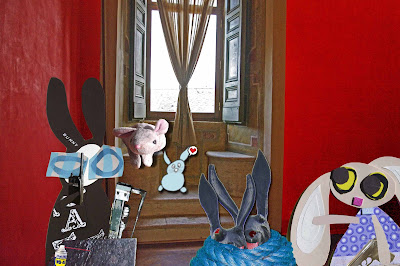 With the Agents of Rabit disabled, the Wabbit and Lapinette rushed back to ensure the safety of the Ambassadors. But they weren't expecting the aftermath of a struggle. "What’s this?" asked Lapinette pointing at two Agents who were securely roped and tied. "They disturbed us," said Pink Bunny. "We did restrain them," said Rettet Kaninchen. "And took them prisoner," said Pink Bunny, "Jetzt ist ihnen nicht gut," said Rettet Kaninchen. "I can see that," said the Wabbit. "They look a little the worse for wear." "They fell," said Pink Bunny. "Into a wall," said Rettet Kaninchen. The Wabbit smiled one of his smiles which he reserved for such occasions. Lapinette grinned. "Better call it in, Wabbit" she said. The Wabbit lifted his walkie-talkie and pressed the red button with delight. "Wabbit to Control," he said nonchalantly. "Can you send a pick-up squad and a first aid team?" The radio hissed angrily. "Hardly anything at all," said the Wabbit. "Bring sticking plasters and two bags of frozen peas." The radio hissed again and went silent. "What’s going to happen to them now?" asked Pink Bunny. "Oh nothing much. Community Service probably" said the Wabbit. "That doesn’t sound so bad," said Pink Bunny. "In Abu Dhabi," said the Wabbit.
at March 27, 2012