4. The Wabbit and the Dark Archetype 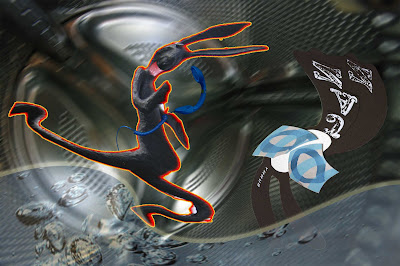 Water streamed into the washing machine and sloshed around as the drum span faster. The Wabbit lost grip of his phone but when he looked for it, his fur stood on end at the sight of an unwelcome presence. "What are you doing in my unconscious?" he growled at what was clearly an Agent Of Rabit. "Get out at once!" he yelled indignantly. "I can't," said the Agent, "because I live here." "You can’t live here, rent free and uninvited," gasped the Wabbit. "I can’t leave because I’m part of you," said the wicked Agent. The water sloshed soap suds around and the Wabbit found himself upside down. "Your a fiendish fiend," gurgled the Wabbit. "You need to give me a chance," replied  the Agent. "I’ll give you justice!" shouted the Wabbit. "And who would make me dried bread*?" said the Agent. "I’ll bring a loaf to your cell every day!" shouted the Wabbit. "Then you would be a prisoner too," said the Agent. There was a long pause. All the Wabbit could hear was water. He fell silent as he thought, and as he thought he revolved. "How can you possibly be part of me?" he asked. "I'm your potential for wrongdoing," said the Agent, "don’t you recognise me?" Then he too revolved as the soapy suds washed over his feet. The Wabbit stared at the Agent of Rabit and the more he stared, the more he recognised. The Agent became fainter and fainter - until he was merely a lick of colour in the soapy water. "It’s a good thing I brought a towel," gurgled the Wabbit.
[*Russian saying: prepare for prison, exile]
at March 09, 2012