6. The Wabbit and the Ghostly Pyramid 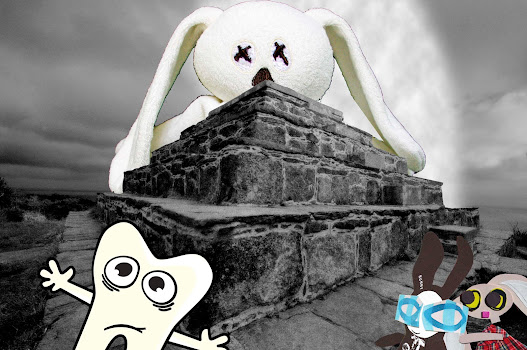 Ghost Bunny was primed, ready and waiting as Lapinette and the Wabbit took the tooth to the pyramid on the hill on the pretext of an outing. The sky grew dark as storm clouds gathered. Waves crashed on a distant beach. It was the spookiest place they know. The tooth grew wary. "What is this dark place?" Lapinette took no notice. "A nice place for a picnic!" The Wabbit was jocular. "We always come here for a nice time." He looked around and then raised a paw. Slowly Ghost Bunny emerged from behind the pyramid and rose in a veil of smoke. She grew enormous. And then she spoke. "Tooth, tooth!" The tooth was rigid. "Tooth, you must give up your ways or I will haunt, haunt, haunt you." The tooth took a step back. He was no longer the happy, laughing tooth the Wabbit had met. "What ways?" His voice trembled. Ghost Bunny's eyes followed him. "Your sweets for your sweet, sweet ways. Give up sugar. No honey for your honey!" The Wabbit narrowed his eyes. "That's a song, isn't it?" "Shhhh!" said Lapinette. The tooth turned and ran down the steps, but he tripped and fell headlong in the grass. "I'll give it all up for you," he cried. "That's a song too," said the Wabbit. Lapinette felt sorry for the tooth, and she went to help him up. She made a sign to Ghost Bunny, who then disappeared behind the pyramid. "I don't think I want anything sweet anymore," gasped the tooth. Lapinette smiled and lifted him. "You're sweet enough as you are." The Wabbit clapped his paws and grinned. "Our work is done." Ghost Bunny's voice boomed from behind the pyramid. "That'll cost you a bespook dinner..."
at January 25, 2022