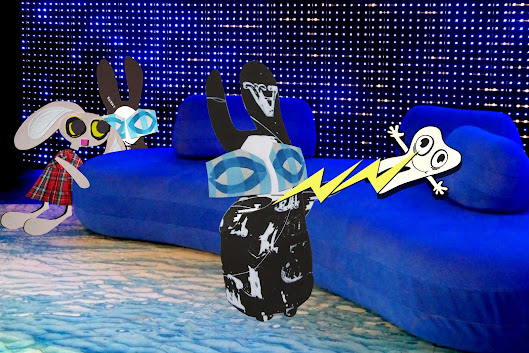 The Wabbit suggested to the tooth that he had to go to rehab. The tooth was aghast. "I don't want to go to Rehab," he yelled. "No, no, no!" The Wabbit and Lapinette went into discussion and they recalled Wabsworth's hypnotism subroutine.  Wabsworth was an android and good at many things. "I've seen him do it," said the Wabbit. "It really works." Lapinette was sceptical. "Who did he try it on?" "On me," replied the Wabbit. "He suggested I ran a restaurant at the Palazzo Madama and I went in there and sold salad sandwiches." Lapinette waited. "I don't remember much about it," continued the Wabbit, "but I made some money." Lapinette paused, shook her head and then agreed. "Nothing to lose." The Wabbit summoned Wabsworth and Lapinette supplied the couch. Then the Wabbit addressed the tooth. "Look how nice this is!" he said. "Your sugar addiction will be gone in no time." The tooth lay on the couch and smiled. "I love sugar. I can't get enough." Wabsworth strode into the room. "Look into my eyes, look into my eyes," he said. Lightning bolts shot from his paws. The eyes on the tooth bulged out. He smiled in a listless fashion. "You hate sugar," said Wabsworth, "Now say it after me. I hate sugar." The tooth lolled. "I hate sugar," he gasped. Wabsworth went on. "How much do you hate sugar?" The eyes on the tooth bulged again. "I loathe sugar." Wabsworth stepped back and snapped his fingers. "You're cured," he said. He offered the tooth a sugar lump but the tooth shook his head and declined. The tooth lay back. "Got any honey?" The Wabbit and Lapinette looked at each other. The Wabbit slapped a paw to his head. "That'll give him a buzz."