1. The Wabbit and the Mentaldent Advert 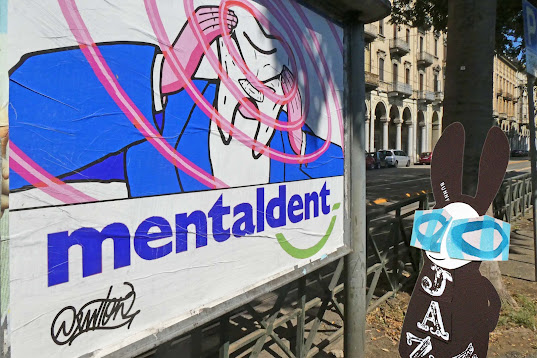 The Wabbit was meeting Lapinette at the station but he had time to spare. So he hopped along Via Sacchi in the sun, looking at the adverts. He'd nearly reached Via Legnano when he noticed a strange advert. He studied it for a while. He mused to himself. "What on earth is Mentaldent?" The figure in the advert had a tooth for a head and looked in pain. "Perhaps it's a new toothpaste?" thought the Wabbit. He shook his head and continued along the road. Trams whooshed past. He passed a clock. It was 11.00  and Lapinette's train arrived at 11.15. So he turned back. But he noticed the advert again and the tooth was missing. Only the body remained. This perplexed him. "Something funny is going on," he thought. He was now a little late, so he began to hop faster. Porta Nuova station came in sight and as he rounded the corner he noticed a movement behind him. He turned. There was nothing there, so he shrugged and continued. The railway notice board said the train was a bit late so he perambulated round the station. Porta Nuova's architecture was rather nice and he spent some time looking at the frescoes. Yet he continued to feel uncomfortable. He was certain he was being followed. But he heard Lapinette's train being announced and made his way to Platform 8 - where Lapinette stood, bearing a mass of luggage. He cursed silently. "Where were you?" she asked. Her voice suggested she was slightly annoyed. "Something's following me," explained the Wabbit. He groaned with effort as he picked up her cases. "Then whoever it is may be strong enough to assist," grinned Lapinette.
at January 12, 2022