11. The Wabbit flushes them Out 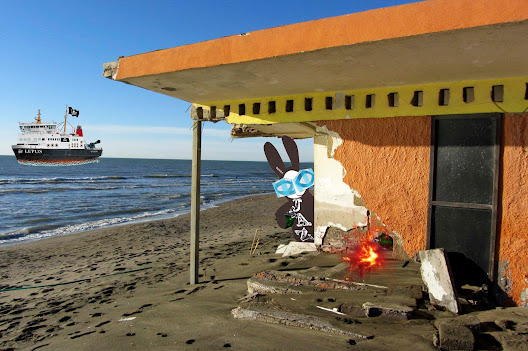 The Wabbit went in alone. He was in charge, so that was his job, He planned to lob a minor kaboom and arrest all the Agents when he'd flushed them from their den. Out at sea, the Lepus approached as close as she could. Under her watchful eye, The Wabbit began his work. He rolled the first grenade into a hole in the wall and then stood by with the second one. "With any luck," thought the Wabbit, "I won't need it." He stood back and mused quietly on the situation. It was like this every year and so he wondered why the Agents bothered. He thought back a decade. Agents had chased the Wabbit across Rome, and he was forced to blow up a minor historic monument. It had cost the Department a tidy sum. He smiled and listened to the grenade sputter. It wasn't terribly powerful. Just sound and fury. What did that signify? He couldn't recall. He watched the first grenade sputter and die. So he gave up and threw the other one. Then he got out of the way very quickly. He dived in the sand and burrowed down. The sound intensified and there was the most incredible crack. Then nothing. The doors of the beach hut fell outwards. What windows there were, blasted into glass fragments. "I didn't mean to use that one," thought the Wabbit. He approached the hut. He heard a cough. Another. A series of dishevelled Agents began to emerge.
at January 04, 2022