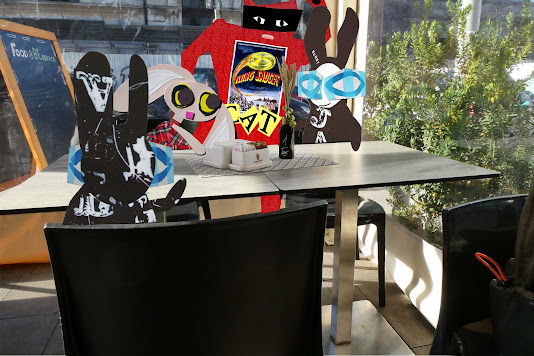 They gathered at a Caffè in New Testaccio Market. It had a new arrangement of plastic tents and there they sheltered from the chill wind coming from the Tiber. Skratch was late as usual. "May I have that seat over there?" "I don't think there is one," observed Lapinette, "Why don't you get one from another table?" Skratch didn't move. "I think I'll answer the question first." They all knew what that meant - so they waited. "It was unusual." Everyone gasped. Skratch continued. "Because it celebrates it's very own anniversary and thus becomes truly reflexive." Lapinette became serious. "Yes. Otherwise it would have confined itself to being chosen for an anniversary and confined to a literary space familiar to readers." Wabsworth stiffened. "Yes. The best of the flatlands." The Wabbit continued. "Anchored in the here and now of phenomena. We have to free our text from the exemplification of a set of codes and allow it to be addressed in its particularity." Skratch looked on in wonder. "Wow," he said. "You must have been reading Stephen Heath." The Wabbit tapped the table. "Stephen Heath is probably the king of analysis" Wabsworth wasn't impressed. "Our stories are difficult to analyse because they're so easy to understand." Lapinette knew a Metz quote when she heard it and she said so. "Metz might have said we're dead for having been seen." The Wabbit laughed and called for the waiter. "Dead for being seen without a drink!"
at January 10, 2022