1. The Wabbit and the Remote Control 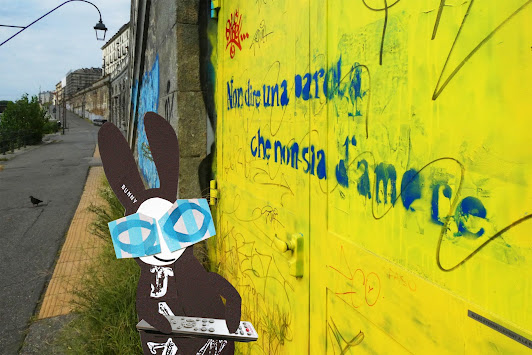 The Wabbit was hopping down by the river when he spotted something lying in the grass. Light caught the edge of the object and it looked shiny and attractive. It was a remote control. He bent down, picked it up and brushed off the grass. It wasn't for a television as he'd first imagined. He made out the manufacturer's name - Marantz. "This is for an amplifier," he thought. The Wabbit was pleased. He had a Marantz at home, but it had no remote. "Maybe it will operate something back at the burrow." He brushed grass and leaves from it. It looked none the worse for wear. In fact, it shone like the day it was made. He had a quick look at the battery compartment - and there were a couple in there. So just for fun, he played with it. He pressed most of the buttons and looked around to see if anything happened. No electronics on the river path, so he shrugged. But the button that caught his attention was the red one. The Wabbit had a bad record with red buttons. He'd pressed them before and without exception trouble  ensued. Heaps of trouble. "I'd better leave it until I'm home," he said to himself. But the button flashed and glowed a dull red, as if it was calling to him. His paw crept toward the red button. "No," he thought, I'd better not." He made to slide the remote under his fur. But the button flashed again and made a sound. "Beweep!" The Wabbit shook it. "Bweeeeeep," it said, but much louder. "OK," said the Wabbit. He moved his paw towards the red button and pressed it. Colours seemed to brighten. Sounds were louder. He pressed again. Without warning his surroundings flashed and he found himself ... somewhere else entirely.
at January 31, 2022