2. The Wabbit and the Platform Party 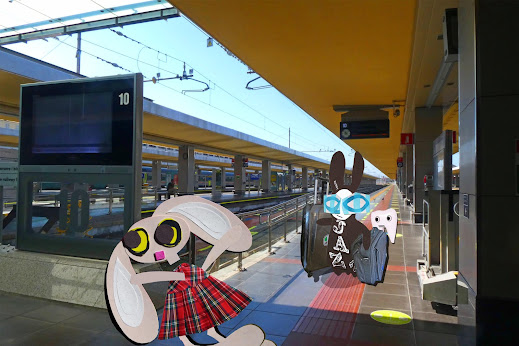 Lapinette sped along the platform and onto the concourse with never a care in the world. The Wabbit stood on the platform with her suitcases. The train was long gone and he had been late. He tested the suitcases. Lapinette called back. "One of them is a trundly trolley, you should manage that one." He grinned and started to make his way along the platform. At the same time, he could feel a presence and he turned round. Nothing there. He looked around the suitcases. Nothing. He wished he had Wabsworth there to help him. Then he heard a noise. It was just like a tooth grinding. He ground his own 28 teeth. Maybe one was broken - but there was nothing amiss there. He felt the case get heavier. He pulled it.  It was definitely not the case he's started with. "Come on Wabbit!" yelled Lapinette, "Nothing to see here!" But he heard a chattering from inside the larger case. It was coming from one of these carbon fibre jobs with all sorts of zips and fastenings and covered with stickers. The Wabbit assumed there was something metal inside. Some special lock or other. He knew Lapinette liked her gadgets - and so it must be one. "Did you bring a chattering thing?" he shouted. "Just you!" came the reply. Lapinette's voice was fainter and he noticed she'd stopped at the bag shop. "Another bag?" suggested the Wabbit. Lapinette turned. "I could use another rucksack." The Wabbit loped along with the luggage in tow and caught up with her at the shop. "Get one for me," he smiled, "I could use another bag too."
at January 16, 2022