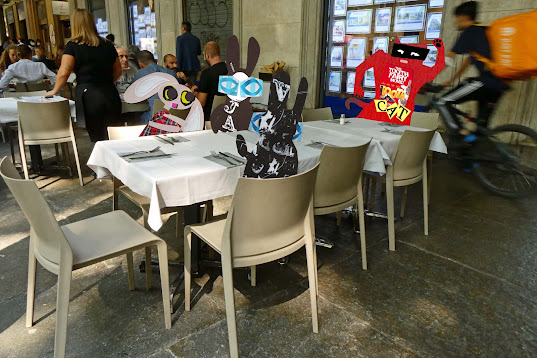 The team assembled at a Caffè of their choosing. It was in Via Vittorio Emanuele and was set out for lunch. "Let's have lunch then," said the Wabbit. "Why not?" said Lapinette. "Don't mind if I do," said Wabsworth. Wabsworth was an android copy of the Wabbit and had developed a food subroutine. He was especially fond of Spaghetti alle Vongole and the Wabbit liked to watch him eat it. Skratch was late as usual, and he slid in at the top table. "Whoa!" he said as a cyclist sped by. Lapinette laughed. "Ah Skratch, would you care for reheated substandard food delivered to your door?" Skratch shook his head vigorously. "I'd rather tell you what kind of adventure you just had." Wabsworth gurgled. "Don't you always?" Skratch ignored this and launched into his spiel. "It was a fantasy adventure where cartoons became living things." The Wabbit grinned. "Don't we always do that?" Skratch shook his head. "I mean very flat ones." The Wabbit nodded his head. "It was esoteric symbolism." Lapinette was sceptical. "I felt it was hyper anthropomorphism." Skratch was inclined to agree with the Wabbit. "A body part stood in for the whole animal with the attendant symbolism of teeth as a transformative object." Lapinette nodded. "We got our teeth into the concept of specified genre." The Wabbit was delighted. "Let's order! Wabsworth's having Spaghetti alle Vongole." Wabsworth wasn't happy. "I was going to have a change." Lapinette spoke soothingly. "You can have anything you want." Wabsworth beamed. "I want Spaghetti cacio e pepe con le cozze." The Wabbit rapped the table. "Make that four!"
at January 28, 2022