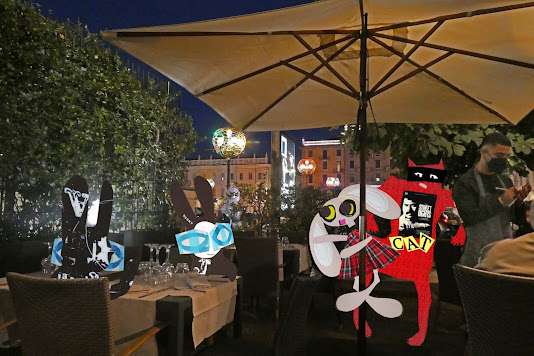 They gathered as usual to discuss the Adventure, but Lapinette took the show by jumping on a pole. She twisted her legs around it and let out a cry. The Wabbit was nonplussed. This was unusual for Lapinette. "Did you start the drinks early?" he asked. "No," replied Lapinette, "I just felt exuberant." Skratch approached from the rear and lifted her higher up. "What was that for a sort of Adventure you just had?" he meaowed. The Wabbit decided to start. "The inanimate object drove the narrative. It was a constant moving element throughout." Skratch laughed. "That's a little tame for you, Wabbit," he purred. "I disagree," said Wabsworth. "I felt it was truly avant-garde. The lamp was tired of acting as a source of illumination for others." Lapinette chirruped from her pole. "It was a challenge to our fixed ways of looking, staring and objectification. A reverse scopophilia." She swung round and back again, narrowly avoiding the waiter. "I suppose you're right," said Skratch. Everyone looked at him. "Lights gesticulate in a shimmery sort of way. They sway and sparkle and we take little notice. Compared to many people I see, they are alive." Skratch gesticulated in a manner designed to imitate the lamp. "Dazzling," said Wabsworth. He was quite taken by this turn of conversation. "The lamp was one of your best inanimate characters, Wabbit." Lapinette went for a total swirl. "He was very sweet, and I hope to see him again." The table lit up with a single flash from the direction of the moon. "I think he just saw you," said the Wabbit.
at September 18, 2021