4. The Wabbit and the Unexpected Turn 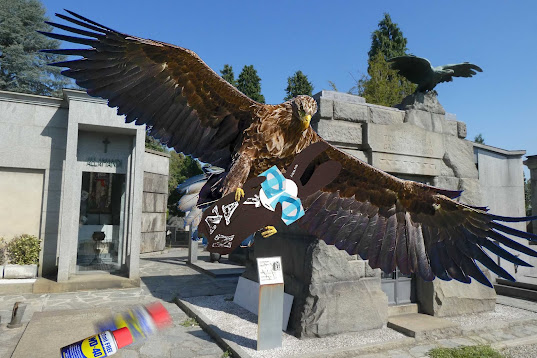 The Wabbit had just finished a chat when the eagle picked him up. Before he knew what was happening, he was headed back to where he started. "I think you're an awfully good companion," said the eagle," I think I'll keep you." He landed by the mausoleum and dragged the Wabbit to the door. The Wabbit knew he couldn't overpower a giant eagle so he slipped his paw into his fur and threw the first thing he could locate onto the ground. It was a can of WD40. Anyone who knew the Wabbit, would know he'd been there. "We're going to have such good conversations," shouted the eagle, "you can bet we are." The Wabbit flailed but he couldn't escape the grip of the talons. "I'm really rather boring," he protested. The eagle swept him through the door. "Not at all, you're awfully good fun," he yelled. "You can accompany me on my mausoleum tour. You'll be a graveyard smash." He spread his wings and pushed the Wabbit inside. "The Wabbit continued to protest. "I'm such a terrible windbag. On and on I go. Better release me if you know what's good for you." The door clanged shut. "See you later for a nice chat," said the eagle. The Wabbit heard the fluttering of wings as the eagle resumed his perch. He shrugged and looked round. It was fairly dark, but he could make out some plaques, flowers and the odd photo. "There might be visitors," he thought, "It might even be today." He tried to look out the window, but it was frosted glass and not very big. So he couldn't see much. "I suppose I could smash my way out," he thought and then smiled. "Wah hoo. Graveyard smash!"