3. The Wabbit and the Old Engineer 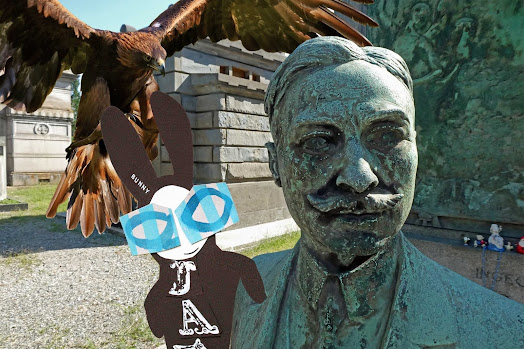 The Wabbit found himself lifted and transported to another grave. He was deposited without ceremony beside a lifelike figure. "This looks like the person himself," said the Wabbit. The eagle spread his wings wide. "Now you can tell me what he did in life." The Wabbit screwed up his eyes. "A kind of scientist. An engineer probably." The eagle made high pitched whistling noises. "Very good Wabbit, I didn't know you were so knowledgeable." The Wabbit grinned. "I read the inscription. And he has intelligent eyes." The eagle laughed. "You make him sound like a dog." The Wabbit patted him on the shoulder. "I'm rather more than a dog, even though I'm dead," said the statue. "My name is Francesco Casabella. How are my bursaries doing?" The eagle intervened. "They go to students in reduced economic circumstances as was your wish." Francesco's statue nodded. "I never hear a thing; you know how it is." The Wabbit thought it best to change the subject. "This seems like a pleasant spot." Francesco spoke again. "Yes. My tomb was donated by the Society of Engineers. I was poor and gave night classes in Bra. Then I got my degree. I built many fine buildings and factories thereafter." The Wabbit gestured to the figures left on his tomb and gave his shoulder another pat. "You have some young admirers I see." The statue seemed to come alive. "I always liked the young people." The eagle made more whistling noises. "We'd best be going. He gets maudlin." The Wabbit smiled and backed away. Everything went back to normal. "This is quite a cemetery," said the Wabbit. "Tell me about it," said the eagle.
at September 24, 2021